HE'S THE ONE THEY CALL DR. FEELGOOD! 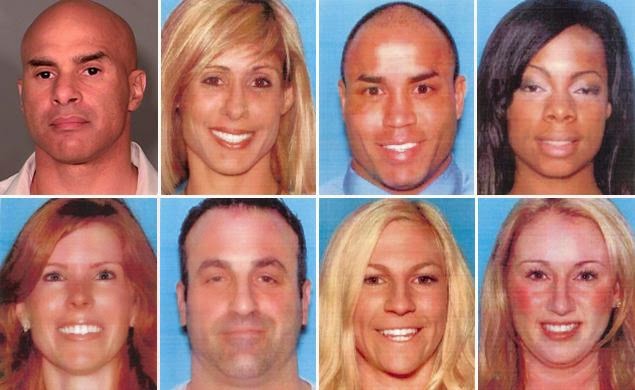 It's no secret that Las Vegas is the City of Sin, but are their doctors supposed to be this sinful? And whatever happened to "What happens in Vegas, stays in Vegas?" That didn't seem to apply to this story, otherwise I wouldn't be writing about it right now! You see; a Las Vegas surgeon and his wife hosted swingers parties at their swanky suburban mansion fueled with psychedelic drugs, sexy costumes and guest lists that topped a hundred free-wheeling revelers.

Dr. Andrew Scott Martin (top left in the photo, so my guess is Martin is really Martinez.) is now facing 10 drug charges and the possibility of prison after unknowingly inviting undercover cops to join in the fun. His wife, Jennifer Martin, was also charged along with six others and has pleaded guilty to one drug count. Officers from Sin City's organized crime unit hunted the hard-partying doctor for months, donning sexy outfits for exclusive galas with themes like "Frost and Furs", "Neon Kitties" and "Eyes Wide Shut."

The officers, posing as a couple, earned their first invitation after setting up a phony account on an adult website. Officer Cynthia Hurtado told a grand jury, "Dr. Scott, was very friendly with us. It was a swinger's lifestyle party, which means people, couples had sexual intercourse with each other. We portrayed ourselves that we didn't participate in any of that. We were just wondering what it was all about." I'm sure that's a lie. The doctor would not have allowed them in unless they partook in the festivities. Maybe he was that dumb? Anyway, the handsy surgeon wasn't always easy, the officers continued. According to Hurtado, Martin allegedly tried to deliver a dose of the party drug MDMA with a kiss. When she said she needed something to loosen up, he replied, "I will get you loose once I have sex with you later." This guy doesn't sound so bad after all. He actually sounds like someone I would hang out with.

Martin opened ASM Ortho after an impressive career as an orthopedic surgeon in the Navy, including a stint treating soldiers during Operation Iraqi Freedom. He ran a successful practice in the City of Sin, specializing in sports medicine. Martin would house his parties at his $3 million dollar house in the suburb of Henderson and the Trump Hotel. Guests were provided with passwords and the drugs allegedly flowed freely at the gatherings.

The officers witnessed partygoers, Robert Ruffin, Jayme Lenz and Jovan Sanita Smith snort lines of cocaine off a kitchen table at the "Neon Kitties" bash, where guests paraded under black lights in glowing body paint. One of the officers scooped a fourth line into a napkin as evidence. All three were later busted on drug charges. Police made their move in September, raiding the Martin House as he geared up for yet another blowout. They recovered cocaine, psychedelic mushrooms, MDMA and more than an ounce of marijuana among other drugs.

A Nevada medical board has since suspended Martin's license noting he was an admitted "user of drugs." He'll still be able to practice, but he'll have to follow a strict set of guidelines, including submitting drug tests. I mean what is there to say about this? You're a doctor in Vegas, right? Like they say, when in Rome....Here's the thing though; if you were going to have these kinds of parties, why would you let in people you didn't really know or people who wouldn't swing? If it was a swinger party and these people were acting prudish, wouldn't that be a cause to throw up a red flag? Just saying. Either way, these parties sound awesome!

Posted by buzzkilltim at 7:04 AM